MARCH 23RD, 2013 SEASON 2 OF THE RACCOONS
Our 3 kittens were all found standing in the window sill tonight. There was a critter outside and they were listening attentively to see what lurked in the darkness. I've been watching and waiting since February for any signs of the raccoon mother returning to our garden. Tonight she was right outside the door. I can't tell for certain that it is her. But she does have well-developed tits (can't wait for the Google search engine on that one..LOL) and that means she has a little nest of babies somewhere in the vicinity. She has beautiful, gray fur with a very thick luxurious coat. No bite marks, no hair missing and she hasn't been in any fights or troubles with cars. I hope this is the same raccoon as last season since I already have a relationship with her. Raccoons can retain memories of places and how to unlock doors for up to four years!!!
David/:0) 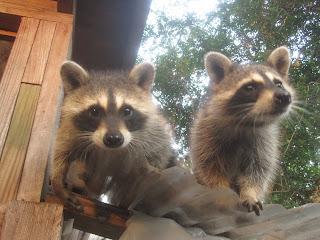 MONTHLY DIARY OF THE RACCOONS, THE CHICKENS, AND THE GARDENER (ME) WHO'S TRYING TO FIGURE ALL THIS OUT. MAY WAS A BUSY MONTH:
MAY FACTS & FIGURES:
NUMBER OF EGGS EATEN: 6
CHICKENS ATTACKED OR EATEN: 0 (they just want the eggs)
NUMBER OF TIMES I HAD TO CHASE THEM OFF THE ROOF: 2

Mamma raccoon has been absent for about a week. She has never brought the babies back to their birthplace...until now. 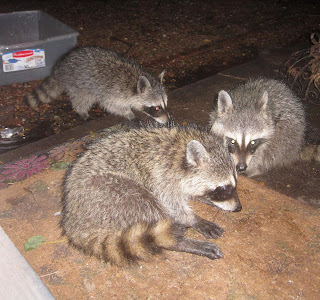 I've been leaving a small bowl of dog food for her each night, but now with the babies starting to forage on their own, it's time to put away all of the food. It sounds cruel, but it's not. 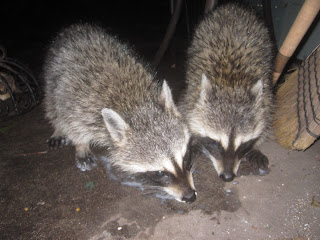 This was their last special treat...they LOVE vanilla ice cream. But the party is over.
Now it's time to forage for worms, grubs, and roaches. That's right, they can hunt down roaches in the dark! 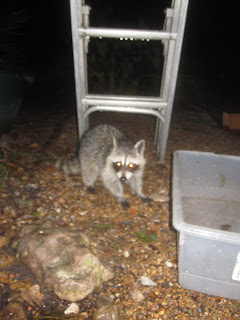 This is Sterling. She's the runt of the litter and probably a girl. The two boys grab all the food and leave her out. It's another reason to let them forage on their own. That way, she'll get her fair share. 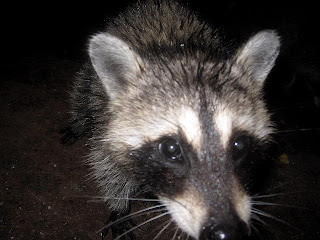 This is Rascal, named after another famous raccoon in the book by Sterling North.
Rascal has absolutely no qualms about walking up to me. In fact, he was ready to walk into our house, so I had to shoo him away with a broom.
The third raccoon is named Rollie and he's the middle raccoon and sidekick to Rascal.
On this particular night he was reaching in to get more food. So Rascal simply layed on the food to keep him from getting it. Then he'd sit up, get a piece, then lay back down. Clever!

May 14th
The raccoons have not been around for about a week...until tonight. I woke up at 12:45 with the sounds of cannon balls rolling around on the roof! I dressed, got my flashlight and broom and herded them off the roof.
I would expect the three little miscreants to be up there playing, but instead there were four. Mamma was up there playing as well! Raccoons make very devoted and good mothers.
***
I thought I had gotten all of them down, but one was left up on the roof.
So Mamma walked right up to me and the ladder and looked up. We both watched little Sterling's acrobatics on the metal ladder.
They left the garden (thankfully) and the party was over.

May 16th
The raccoons are back on the roof at 2:00 AM! I got out of bed, climbed a ladder with a flashlight and a broom and chased them around the roof. I had to get them near the tree limb and push them with the broom. It was funny, but not at 2:00AM. Momma came down first, then all the raccoon babies.
May 17th
I sawed off both limbs and took down the ladder. We will see if this is enough.
May 28th
No raccoons on roof or around the yard.
May 30th
I haven't seen the raccoons in 1/2 a month, but today three of the eggs were eaten and the shells left in the nest box. The mother raccoon has broken into the pen 7 times now, but this time was different: I can't find where she pulled the wire away from the pen. The 'Houdini' of the animal world has struck again.
How can I patch a hole that doesn't exist?
I will have to catch her in the act. 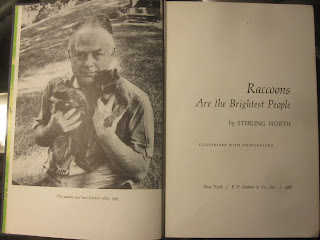 The BEST book on understanding how raccoons think. They are the second smartest mammal on the North American continent. Many Native American tribes referred to them as the 'little people of the forest'. 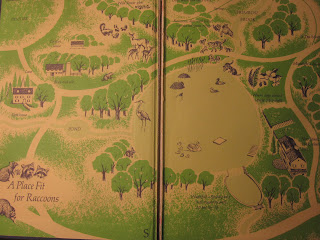 Sterling North had both raccoons and a full farm including over a hundred chickens.
He figured out how to keep them out using excellent fencing. 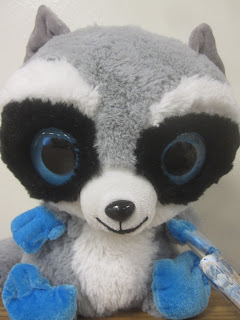 We still like raccoons, but I don't want them eating the eggs! 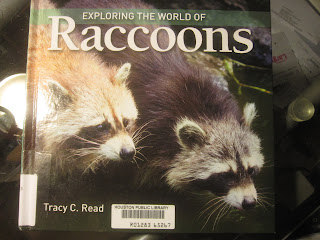 Another book on the subject. 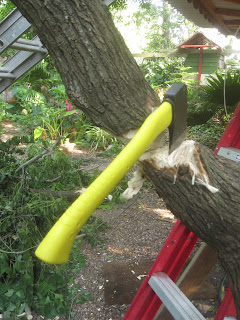 Hard at work eliminating the 'road' to my roof.
﻿ 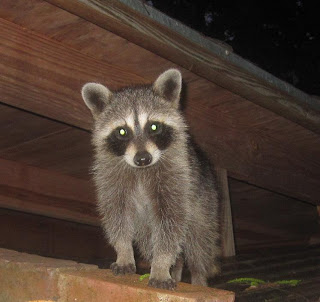 An April photo of Rascal, one of the three baby raccoons raised in our garden shed.

Entry 1: Went outside to check on the hens and heard something BIG up on the roof. Normally it's an opossum, but this was different. It stopped halfway down the Loquat tree and I spotted its striped tail.
This was a RACCOON! I have never seen a raccoon in my garden, but I've suspected they lived in the neighborhood. I spent the rest of the night worrying about my chickents.

Entry 2: Woke up early and the chickens were still alive. Round 1.

Entry 3: Stapled another complete set of chicken wiring in the roof and eaves of the hen house. I'm matching wits with one of the smartest wild animals we have here in Texas.

Entry 4: It's been a week and the hens are all still alive. I'm not as worried. I'm finding out that raccoons are strictly nocturnal except in two cases: when they get overfed in parks and when they are nursing mothers.

Entry 5: Saw the raccoon up close and it's a nursing mother. Now I'm worried about it coming out during the day when the hens are in the chicken run. I'm calling the Houston Wildlife Shelter for advice. Maybe I can catch the mother and the babies and move them to a nearby forest. Maybe not.

Entry 6: The mother raccoon is definitely living in my garden shed. I heard scratching and saw her come out from behind some lumber and onto a shelf at nightfall. It looks like a very young raccoon. This might be her first set of babies. She has not lived here long. 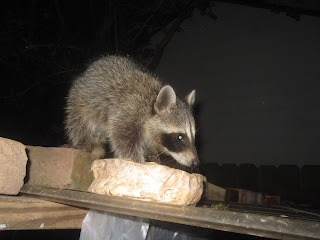 Entry 7: My plan to release them into the wild just got nixed by the wildlife rehabilitation people. The lady at the rehab center told me that if I were to release the mom into the forest west of town, the local population of raccoons already there would harrass and even kill the entire family.  The second reason she gave for not releasing them was more interesting. She explained that if I were to take the momma and her family away that it would leave a hole in the territory. My garden would then be claimed by other raccoons and maybe even fought over. It was her opinion that if I could coexist with the raccoons that it would be far better to keep them where they are. Whew! That's fine for me, but what about my 4 chickens? I don't know how to break the news to them. Having both raccoons and chickens in the same garden seems absolutely insane. I need Dr. Doolittle's magical ways to make this happen.

Entry 8: I have not heard any sounds from the garden shed while momma is out hunting for food. Did something come in a kill the babies? Gee, I feel so sad for her if she has lost her babies already. I would guess they would be about a month old. 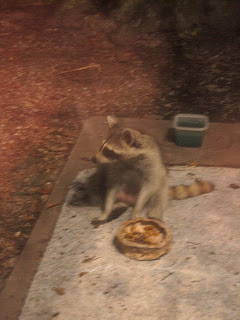 Entry 9: I've name the mother raccoon Leilanie. It is Hawaiian for Heavenly Flower. She's a beautiful creature.
I'm still in disbelief that I have a wild raccoon in my garden. End of month and hens are still alive.

Entry 1: Had the chickens out of their pen at 6:30 PM with plenty of daylight. Looked up and there was the RACCOON standing on top of the garden shed looking down at the chickens and me! I didn't know they would come out during the day. It was a chess game at this point. If I grabbed one chicken and took it safely to the pen, that would leave three for the raccoon. So, I picked up one and walked right up to the edge of the roof, made eye contact, and said 'NO'. I did this several times. Maybe it didn't understand, but it sure looked at me as if it did. In a raccoon's mind, it probably went like this:
Big human likes the hens. Big human can grab the birds? Big thing is in charge of the birds? Humphf!
It turned and went back into the building.
At this point, I rushed inside my house and got two pieces of bread. I put them right on the shelf next to the raccoon and waited. It looked at me, then took the bread and started eating. I'm sure it thought better of the big human, and hopefully thought BREAD, yes   HENS, no.
The bread gave me time to gather up all 4 hens and get them safely inside the henhouse. 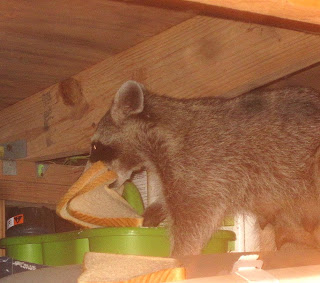 Entry 2: The raccon did not come out during daylight today, so the pattern is back to nocturnal. I've decided to put out a bowl of dog food on the back porch so that the mother raccoon will not be so hungry all the time while it nurses her young. This will make the hens, hopefully, less desirable as a meal choice.
Easy bowl of food vs. tearing through wire cage, catching and killing big flapping birds and making the big human angry.   So far the mother raccoon has picked easy bowl of food each night.

Entry 4: Saw the raccoon out in the MORNING?!?  Momma climbed up a yaupon bush and looked into the neighbor's yard for dogs. It then went back into the building. 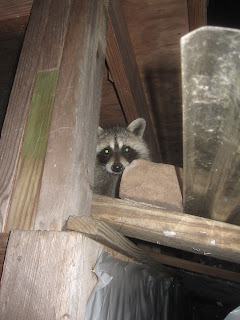 Entry 5: April 22nd. It was getting dark and I happened to look up at the garden shed window. The babies are here! Oh my! I've never been so close to raccoon babies in my life. They are very quiet. They stayed on the roof and played but never went down to the ground. Mom stayed with them and watched me like a hawk.
Entry 6: The babies were out again tonight. I turned on the light in the garden shed and they played all around the shelves. I got close enough to feed two of them a piece of bread. They thoroughly enjoyed the bread. My whole family stayed outside the shed and watched.
Entry 7: The raccoon family is gone. I think the light and all the attention was too much for mom.
They might come back. They might not. I'll miss them greatly but most of my friends at school say 'good riddance'. I guess raccoons are not well-liked by a lot of people. 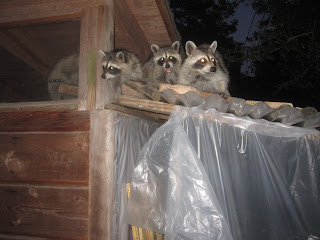