April 10, 2011: A single Agave celsii which had not recovered from the winter showed signs of crown rot. Upon close examination, 2 large (1inch) black beetles were discovered along with a rotted core area of the agave. Thanks to Pam at Digging, I knew exactly what I had...the dreaded Agave weevil, Scyphophorus acupunctatus.
POINT OF ENTRY: I've never seen this horrible beetle and I've grown agave for close to 8 years. My best guess is that it came in some soil from an Agave celsii I purchased last summer. It came from a local Wal-mart. There was no hint that the agave was under attack.
FIRST SIGNS: This Agave celsii  had stopped growing since early Spring.  A brown slit was observed in the central bud core and that was also cause for alarm. 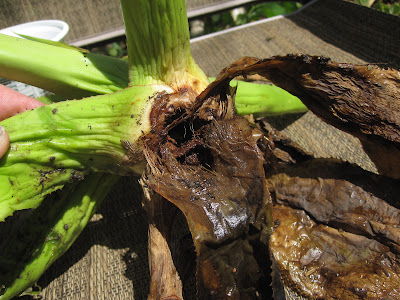 Rot associated with grub activity. The weevils introduce a bacteria which then starts to decay the tissues. 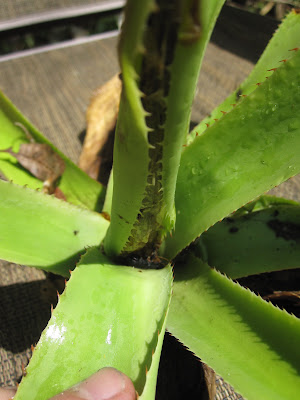 To check for decay, gently squeeze the agave center. If it is solid and hard, that's good. If soft, explore so more. 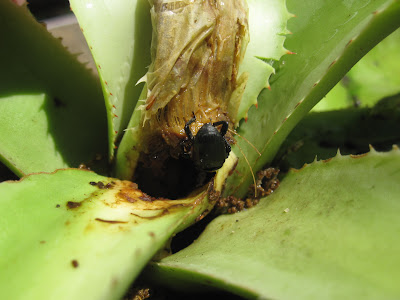 After unrolling the outer bud sheaths, the weevils appear. There were 2 adults with no grubs.
I kept both in a jar for observation. The adults lived with only water and no food for over 2 weeks! 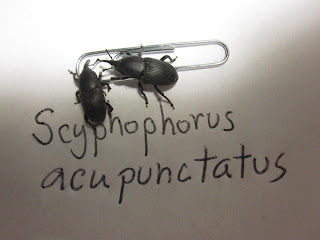 I have a biology degree with a continued interest in entomology. Still, it's hard to be objective when your agave collection is at risk. I named the villains Bonnie and Clyde. 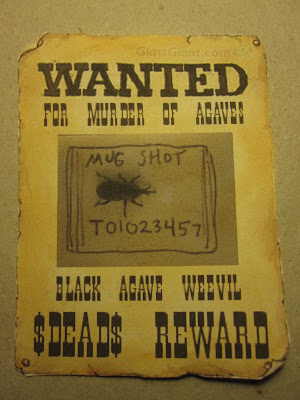 Agave weevils: Wanted DEAD or REAL DEAD
(Making this sign was the only fun I had in the entire process)
Finding Damage: After pulling up the infested agave, bagging it up and putting it in the dumpster (not compost bin!), I inspected the soil and found no traces of larvae or adults. This was good news﻿.
Inspecting other agaves: To my dismay, I found signs of damage on other Agaves in a bed about 30 feet from the original point of entry. I set traps, but found no weevils. Could it be that these adults travel at night over 30 feet, then go back 'home' to the original agave to eat and hide?
I used both Bonnie and Clyde to determine their speed of travel. Though insects appear to move slowly, these two could travel 1 foot per minute or 30 feet in 30 minutes. If including the difficulties of traversing short lawn grasses and doubling the time, it would still only take an hour to get to the bed and an hour to get back. This would leave 6 extra hours to explore food sources. This is only a theory. I could be wrong.
DAMAGE on AGAVE AMERICANA: 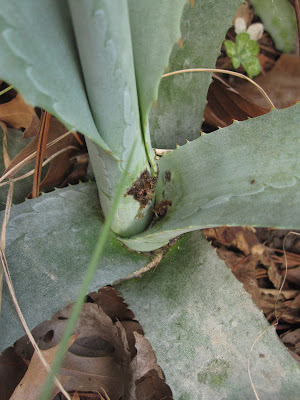 This is not frost damage. The whole was gummy with sap and fresh. I took this one apart and found no eggs, larvae, or adults. It may have been the starting hole to introduce the bacteria. This was a smaller agave.
I've also read about 'scratch marks' on the agaves where the weevils try to damage the plants. 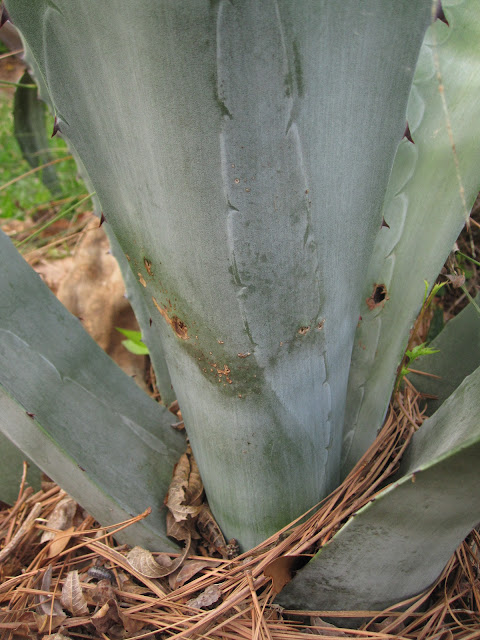 These scratch marks and the rotted hole in the other leaf are reasons for concern. Since there are no known organic remedies (what eats agave weevils?), I will have to use a systemic grub treatment to save my collection.
CONTROL & ERADICATION: According to a number of garden bloggers, garden websites, and public garden websites, the only certain control for this weevil is a product shown below. It contains the active ingredient MERIT.  The Bayer Grub Control pictured has only this one ingredient. I was relieved to know that this product is fast acting, decays into simple carbon dioxide after 30 days, and does not need to be reapplied except in the Spring and Fall. Systemic controls are taken up by the roots systems of plants and kills any grubs or adults feeding on the tissues. I believe it kills weevils through disrupting the nervous system of the insect.
As a final irony in all of this, I realized in the car driving home that I had purchased the poison from the same store in which I bought the agave. Full circle and hopefully a closed circle. The nearest agaves in my neighborhood are 1/4, 1/2, and over 1 mile away. Since the adults are flightless, they would have to travel over many busy streets to arrive from another infested agave. This would take over a week. I would hope this is close to impossible. In arid regions with many agaves on each street, I would consider reapplying this product each Spring as a caution against future infestations. 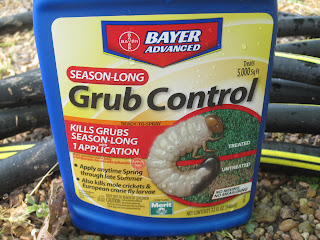 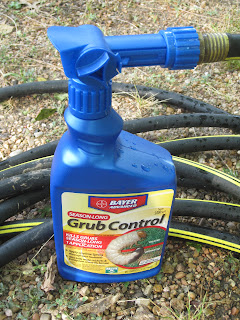 Update June 8th, 2011:  Had quite a scare since I ﻿found one new agave and one new yucca that had damage from April, but had grown out of it by June. The damage just now started showing as the leaves 'grew out' from the center. After dissecting the base, everything was white with no active damage.
﻿ 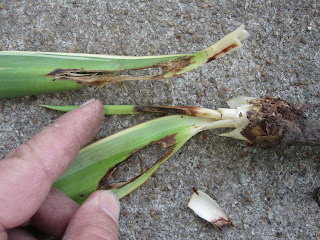